Hey small business owners – how many of you are familiar with the sport of curling?  For those of you who are not familiar, let me share a bit about the sport with you.  It’s kinda like shuffleboard on ice combined with the strategy of chess but played in teams of four people.  Each team ‘throws’ eight rocks (or stones) across the ice to a target on the other side, alternating with the other team.  It becomes super popular every time the Winter Olympics come on, as it seems like the sport that armchair athletes are most likely to be able to qualify for.

(You can learn more details in this cute two-minute video or this list of seven facts about curling.)

The four team members each have a different role.  The Lead throws the first two stones for the team, the Second throws the second two stones, and the Vice-Skip or Third throws the next two stones.  Each person alternates with their opposing teammate in the same role.  And each of these players serves as a sweeper when they aren’t throwing stones, sweeping the ice with a ‘broom’ to help guide the stone to its target.

Then there’s the Skip.  The Skip is basically like the team captain.  The Skip calls the shots and determines if a rock needs to be swept or not.  And the Skip throws the last two rocks for the team.  The Skip is in charge of the overall strategy for the game but not as involved in the actual throwing or sweeping.  He or she is responsible for throwing the last two rocks, hopefully to save the day and score some points.  Otherwise, the Skip’s job is to determine the next shot and then call for a sweep (or not) once the team member throws the rock. So, the skip’s role involves overseeing the team, determining the strategy, and calling the shots, but not getting as actively involved in play as compared to the other players.

Does that sound familiar to any of you small business owners?

Hopefully you get the analogy.  You are smart or you wouldn’t be running a business, so I don’t think I need to spell this out.  But honestly, I didn’t make the connection until this past week.

See, I have been curling for just under ten years now, but my role has been pretty much any position except Skip.  And like a backseat driver, I’m always happy to tell my Skip what he/she is doing wrong or what I think the right next move is.  But I have been absolved of any true responsibility since it’s not actually my call.  Until now.

I just joined a Women’s League at my local curling club, and my three teammates are all brand new to curling.  So, I became the Skip out of necessity since I was the most experienced one on the team.  I may have been curling for a while, but the game looks very different from the Skip’s position.  My view as Skip involves standing on the other side of the ice calling the shots.  This is very different than when I’m doing the rock throwing or sweeping under the direction of the person calling the shots.  Sound familiar yet again? 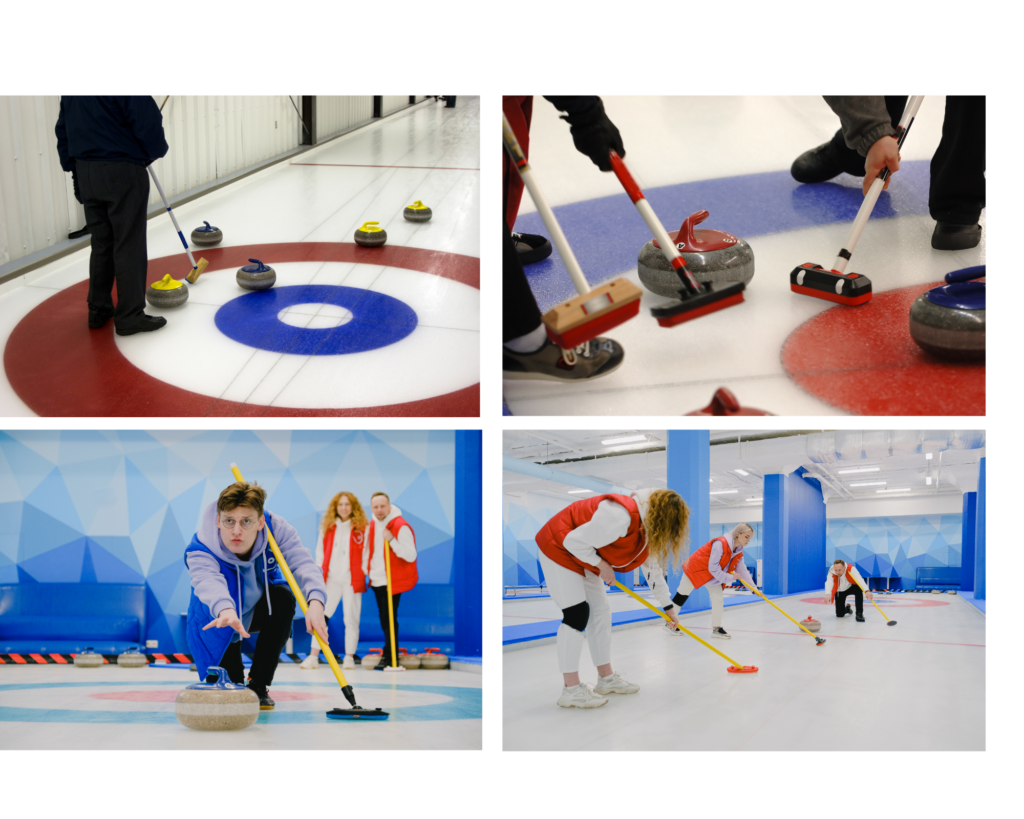 The Challenges of Skipping

Here is what I learned as I started my new role as Skip.  First of all, my teammates, who were brand new to this sport, weren’t going to help me determine what the right call should be.  As a matter of fact, it was up to me to explain the game and my strategy to them.  And the Skip on the opposing team isn’t likely to be a big help if she wants to win the game herself.   So I’m on my own.

Also, the ice does look a lot different when you’re right there in the “house” (aka target) where the rocks have been thrown as compared to standing on the other side getting ready to throw the rock to that house.  It’s harder to see what might be in the way looking over top of the house rather than looking at it from the front.  Sometimes there are other barriers (rocks) making it difficult for the next teammate to put the rock where I want it to land.  I learned I need to walk around to the front of the house to see the situation from that perspective before I decide on the next step.

Finally, I started to realize that I can’t just focus on one rock at a time.  This is a game of strategy.  Often the first rock to be thrown is positioned to be a ‘guard’ – even though that rock has nothing to guard just yet.  You are just putting plans in motion for the next rock and the next rock.  In my other roles on a curling team, I didn’t have to think about the long-term strategy, I just threw my rock where the Skip indicated to throw it (more or less) and swept when the skip said to sweep.  Suddenly as skip, the game became that much more challenging.  I’m the one telling the Lead to put rocks in place in anticipation of future shots from both my team and my opponent’s team.  The more I strategize the better off my team will be positioned when it’s my turn to throw the final rock.

Now if it wasn’t hard enough to plan for where you want the rocks to land, the sport of curling adds in a bunch of other variables that are harder to control.  For example, the ice changes over the course of the game.  It might start out fast, but as more rocks are gliding back and forth across the ice, and as they are swept by the teams, the ice starts to melt a little bit.  That can affect how fast the rocks move, and how much they curl.

Now add to that the fact that I am clearly not playing an Olympic caliber game.  My teammates and I certainly can plan for the ‘ideal’ shots, but that doesn’t mean that we actually put the rocks where we want them to go.  We often need to operate on what we call Plan B – or even Plan C or D.  If the rock doesn’t end up where we wanted it to go, then we adjust the strategy to account for the new situation.

This just adds to the complexity of the game.  Over time I may start to learn that my Lead tends to throw a tad light, so I ask for a harder throw and have the team sweep right away.  And the Second might twist the rock a bit too much, so I adjust my call to account for that fact and to get the rock to go where I actually want it to end up.  All of these adjustments and non-perfect shots make it even harder to have a long-term strategy.  It feels like I should just focus on one shot at a time.

And that takes me right back to my curling as business analogy.  How often have you felt like things are changing too rapidly and/or your team is not fully prepared for their jobs?  In a situation like this, it can be easy to focus on the day-to-day operations and just be grateful that you are making it through the day.  How can you possibly plan several steps ahead when everything is so unpredictable?

It’s important to remember that the opposing team is dealing with the same circumstances.  If that skip is working her best to plan ahead a couple shots, then her team will likely do better than mine.  And if she is taking her time to explain the game and the strategy to her team members, then eventually they will be able to help her call the right shots.  So, giving up and not strategizing isn’t a sustainable solution for a team – or a small business.

Instead, whether we’re talking curling or business, your success depends on you taking the time to anticipate future moves beyond the short term, whether that’s the next couple shots on the curling ice, or the next couple quarters for work.  If your plans don’t work as you hoped, be prepared to pivot to Plan B, or C or whatever starts working for you.  Certainly, practice and training can benefit everyone as well.  And finally, consider that the more you communicate with your team, the more they will be able to collaborate with you to map out a successful path.  The skip may call the shots, but the whole team can play a role in the process.

So much change is underway, it can be a challenge to keep up with it all.  How will automation, blockchain, climate change, demographic shifts and other external forces impact your business and your customers?  Join me to keep an eye on these topics and more, to prepare your business for a successful future.  Start by subscribing to my biweekly blog posts by email so you don’t miss anything!