Don’t Fly Over Me! 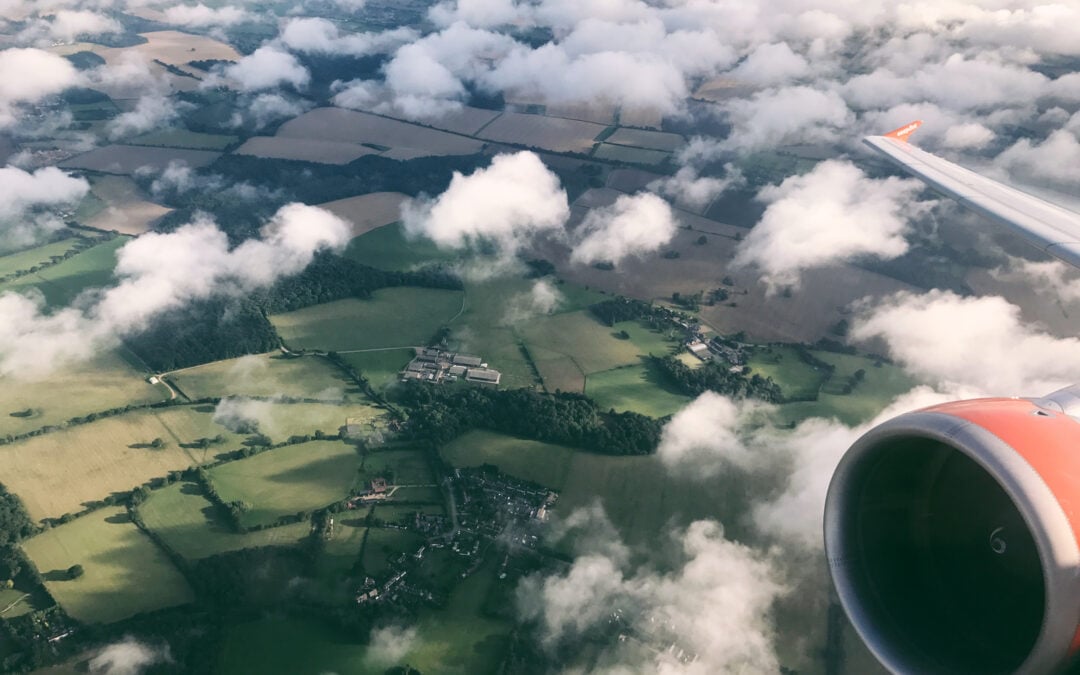 Hey, my Midwestern small business owners, it’s time to think big and convince those New York and Silicon Valley VCs that we can be just as innovative, creative and successful as anyone in their big city!

Of the top 50 companies, 27 are from Silicon Valley California, and 10 are from New York City.  Now there were some other towns in there, including Bloomington, MN, Indianapolis, IN, Kansas City, MS and Chattanooga, TN.  (Side note: Props to Chattanooga for making an early commitment to startups with their smart grid and gigabit internet network.)

But really?  Three-quarters of the top 50 from two places?

If you look at all 500 companies on the list, only 3 are from Wisconsin, 3 from Minnesota, and 0 from Michigan or Iowa.

How can the Midwest have so few businesses on this list?  Here are my thoughts on the subject:

A correlation between Startups and Venture Capital Funding?

My top guess is that there is a direct relationship between fast growing start-ups and venture capital firms.  In one study, over half of all VC investments in 2018 went to small businesses and startups in California alone!  If you add Massachusetts, New York and Texas, those four states account for 80 percent of venture capital dollars.

Now the data is clear here.  According to a Brookings report, “in recent decades VC has generated more economic and employment growth in the U.S. than any other investment sector. Annually, venture investment makes up only 0.2% of GDP, but delivers an astonishing 21% of U.S. GDP in the form of VC-backed business revenues.”

Are Midwesterners just more conservative in general when it comes to their money and their willingness to take a risk starting a business?  Apparently, the facts don’t justify this impression, based on data from a midwestern business journal article and the U.S. Small Business Association.

First, consider the fact that the Midwest contains a large majority of small business owners in the riskiest business of all – farming.  Is a tech startup riskier than that?  What are the barriers to entry?  Farming typically involves huge start-up costs including land purchases and a significant amount of machinery.  On the other hand, many of the Silicon Valley tech businesses are based on an idea, and often an idea that doesn’t actually generate revenue for a long time and doesn’t require much in the way of start-up costs.

Second, look at the proportion of small businesses across the Country.  This map shows the percentage of people who are self-employed by county in the U.S. according to the U.S. Small Business Association.  While there are darker colors (more self-employed businesses) in California and some of the East Coast, there are also plenty in “fly-over” land. 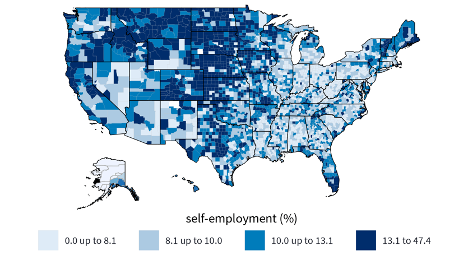 Maybe We’re Not So Different After All?

Beyond just self-employment, if you dig deeper on a state-by-state basis, it turns out that Midwestern states are comparable to the Coasts when it comes to the percentage of the state workforce employed by businesses with fewer than 500 employees.  For example, 49.5% of Wisconsinites work for a business with under 500 employees, as compared to 48.5% of Californians and 49.8% of New Yorkers.

Then if you dig deeper, as we market researchers are known to do, we find out that if you look at employers with 1-19 employees, the rates continue to be comparable.  For example, 19.9% of Wisconsin small businesses have 1-19 employees (as opposed to those with 20-500 or those with no employees at all).  But in California, the same rate is 16.4%.  In New York, the rate is 18.8% and in Michigan it’s 16.8%.  None of these numbers are drastically different, and Wisconsin is higher than all of these states.

What About Quality of Life?

Let’s be honest here, this is pretty subjective.  As I sit here looking at the snow on my front yard in mid-March, it’s hard to argue with the perfect California weather of Sunny and 72 degrees every single day.  And New York City is the home of an astonishingly large number of high-quality restaurants, shops, live entertainment venues and more, as compared to my small town.

But consider these facts:

Now add to that the natural beauty of the region, the incredible Great Lakes, the lack of natural disasters such as hurricanes, wildfires, mudslides and so forth, along with shorter commutes.  And don’t forget the Midwest-nice personality, don’t cha know!

Finally, consider the fact that COVID has changed the game when it comes to whether you need to work and live in the same place.  According to a Wall Street Journal article, before the pandemic, about 10% of the U.S. labor force worked remotely full-time.  But once the pandemic locked things down, about half of the U.S. worked from home.  And we won’t likely return to our former ‘business as usual’.

This is causing a boom of “Zoom towns” as people move from expensive cities to lower cost regions of the Country.  This is giving smaller communities the ability to “build their economies based on remote workers and compete with the big-city business centers and West Coast high-tech meccas that have long dominated the employment landscape.”

The fact that these remote employees ended up being just as productive, if not more so, than when they worked in an office, will likely encourage businesses to be more open to letting employees work from the location of their choice.  And these employees are choosing to leave the expensive Coastal cities in search of affordable housing, lower taxes and more outdoor space.

As the article says, this change “will shift the main thrust of economic development from paying incentives to big employers to investing and building up a community’s quality of life. As communities attract more remote workers, their tax bases will grow, allowing them to improve schools and public services, benefiting everyone. Eventually, companies will come too. That holds out the possibility of a better, more virtuous circle of economic development.”

I rest my case

We are slowly shifting from a world where there are “hubs” of scalable, rapidly growing businesses in areas like Silicon Valley, to a world where we can pick our location first, and then start a business from our ideal location.  As that shift continues over the next few years, I expect that we will see first employees of large companies shift their location towards the middle of the country.  And that will lead to more of those employees deciding to start-up in their desired home town, which will then have a multiplying effect.  Hopefully the VC firms will follow that path as well, creating more opportunities for those of us located in the fly-over zone.